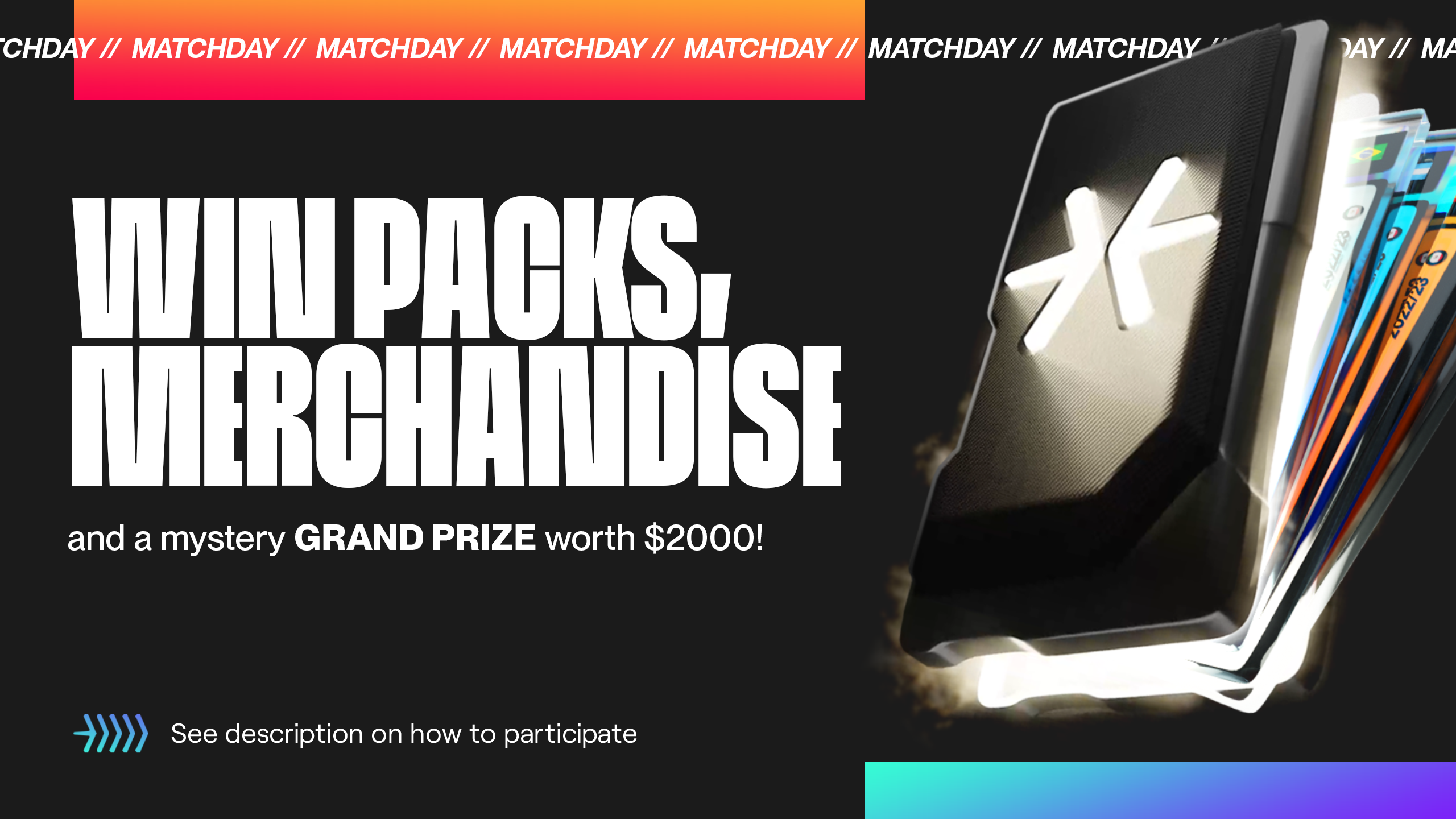 To celebrate the start of the World Cup and the launch of Matchday player cards, we are doing a MASSIVE giveaway! Here’s your chance to win more Matchday cards, tournament merchandise, and even a mystery grand prize worth $2000!

Participation is easy, you don’t want to miss out on this.

Official Rules and How to Participate

By participating, you accept the terms and conditions below.

Winners will be contacted via DM on the respective social media. Winners have 48 hours to respond to the DM and send over the necessary information for us to be able to ship the rewards, so make sure you keep a lookout on November 27th!

1. Eligibility: The Matchday Social Giveaway (“Giveaway”) is open to legal residents, who are not in the OFAC sanctions list. Entrants must be 18 years of age or older as of their date of entry in this promotion in order to qualify. This giveaway is subject to federal, state, and local laws and regulations and void where prohibited by law. Play Time Inc.'s employees, its subsidiaries, affiliates, suppliers, partners, advertising and promotion agencies, and directors (collectively the “Employees”), as well as members of an Employees' immediate family and/or those living in the same household of Employees are ineligible to participate in the Giveaway.

3. Agreement to Rules: By entering this Giveaway, the Entrant (“You”) agrees to abide by the Sponsor's Official Rules and decisions, which are fully and unconditionally binding in all respects. The Sponsor reserves the right to refuse, withdraw, or disqualify any entry at any time at the Sponsor’s sole discretion. By entering this Giveaway, You represent and warrants that You are eligible to participate based on eligibility requirements explained in the Official Rules. You also agree to accept the decisions of the Sponsor as final and binding as it relates to the content of this Giveaway.

4. Giveaway Entry Period: This promotion begins on November 19th at 10:00AM PST and ends on Nov 26th 2022 at 23:59 PST (“Entry Period”). To be eligible for the Giveaway, entries must be received within the specified Entry Period.

6. Prizes: One Grand Prize shall be awarded. The Grand Prize will be determined at the Sponsor’s discretion with a retail value of $2000. Five Runners Ups will be awarded with either an Adidas Al Rihla Pro Ball, or an authentic jersey of a World Cup team of the Your choosing, retail value of $100-$150. 20 Third Placers will be awarded with a pack that consists of 5 random Matchday cards, retail value of each pack $0-$5. If the Grand Prize Winner resides in the United States, the Winner must provide the Sponsor with a valid Social Security number or taxpayer-identification number before the Sponsor can award the prize via a Form 1099. The actual/appraised prize value may differ at the time the prize is awarded. The prize(s) shall be determined solely by the Sponsor. There shall be no cash or other prize substitution permitted except at the Sponsor’s discretion. The prize is non-transferable. The prize is non-transferable. The Winner, upon acceptance of the prize, is solely responsible for all expenses related to the prize, including without limitation any and all local, state, and federal taxes. The Winner shall not transfer assignment of the prize to others nor shall the Winner request the cash equivalent or prize substitution. By accepting the prize, the selected Winner grants permission for the Sponsor to use the Winner’s likeness, entry, and name for purposes of advertising and trade without further compensation unless prohibited by law.

7. Odds: The total number of eligible entries received determines the odds of winning.

8. Selection and Notification of Winner: The Winner will be selected by a random drawing under the supervision of the Sponsor. The Sponsor will notify the Winner(s) by the relevant social media channel within 5 days following Winner selection. The Sponsor is not responsible for nor shall have no liability for Winner’s failure to receive notices due to security settings that may cause notifications to be marked as spam or junk. Nor shall the Sponsor be liable for the Winner’s provision of incorrect or otherwise non-functioning contact information. If the Winner 1) fails to claim the prize within 48 hours from the time the award notification was sent, 2) is found ineligible, or 3) does not complete and return an executed declaration and release within the specified timeframe, the prize may be forfeited and an alternate Winner may be selected. Receipt of the prize (offered in the Giveaway) by the Winner is upon the condition of compliance with any and all federal, state, and local laws and regulations. IF THE WINNER VIOLATES ANY OF THESE OFFICIAL RULES, THE WINNER (AT THE SPONSOR’S SOLE DISCRETION) WILL BE DISQUALIFIED, AND ALL PRIVILEGES AS WINNER WILL BE IMMEDIATELY TERMINATED.

9. Rights Granted by You: By submitting an entry (e.g., text, video, photo, etc.) into this Giveaway, You understand and agree that the Sponsor, any individual acting on the Sponsor’s behalf, and the licensees successors, and assigns of the Sponsor shall, where permitted by law, have the right to print, publish, broadcast, distribute and use in any media known now or hereafter developed, in perpetuity, worldwide, and without limitation, your submission, name, photo, portrait, voice, likeness, image, statements about the Giveaway, and your biographical information for news, publicity, advertising, promotional purposes, trade, information, and public relations without any further notice, review, consent, compensation, or remuneration.

10. Terms & Conditions: In its sole discretion, the Sponsor reserves the right to modify, suspend, cancel, or terminate the Giveaway should non-authorized human intervention, a bug or virus, fraud, or other causes beyond the Sponsor’s control, impact or corrupt the security, fairness, proper conduct, or administration of the Giveaway. The Sponsor, in the event of any of the above issues, may determine the Winner based on all eligible entries received prior to and/or after (if appropriate) the action taken by the Sponsor. Individuals who tamper with or attempt to tamper with the operation or entry process of the Giveaway or website or violates these Terms & Conditions will be disqualified by the Sponsor in its sole discretion. In its sole discretion, the Sponsor has the right to maintain the integrity of the Giveaway, to void votes for any reason, including, but not limited to: multiple entries from the same user; multiple entries from the same computer beyond the number allowed by the Giveaway rules; or the use of bots, macros, scripts, or other technical means for entering. Attempts by any entrant to deliberately damage any website or undermine the legitimate operation of the Giveaway may be a violation of criminal and civil laws. If any such attempt is made, the Sponsor reserves the right to seek damages to the fullest extent permitted by law.

11. Limitation of Liability: Your entry into this Giveaway constitutes Your agreement to release and hold harmless FIFA, the Sponsor, and its subsidiaries, representatives, affiliates, partners, advertising and promotion agencies, successors, agents, assigns, directors, employees, and officers against and from any and all claims, liability, illness, injury, death, litigation, loss, or damages that may occur, directly or indirectly from participation in the Giveaway and/or the 1) Winner accepting, possessing, using, or misusing of any awarded prize or any portion thereof; 2) any type of technical failure; 3) the unavailability or inaccessibility of any transmissions, phone, or Internet service; 4) unauthorized intervention in any part of the entry process or the Promotion; 5) electronic error or human error in the Giveaway administration or the processing of entries.

12. Disputes: THIS Giveaway IS GOVERNED BY THE LAWS OF THE UNITED STATE OF AMERICA AND THE STATE OF CALIFORNIA, WITHOUT RESPECT TO CONFLICT OF LAW DOCTRINES. The Entrant agrees, as a condition of participating in this promotion, that if any disputes cannot be resolved between the Entrant and the Sponsor, and if causes of action arise out of or are connected with this Giveaway, they shall be individually resolved exclusively before a court located in California having jurisdiction, without resorting to any form of class action. Under no circumstances in any such dispute shall the participant be permitted to obtain awards for, and hereby waives all rights to, punitive, incidental, or consequential damages, including reasonable attorney’s fees, other than participant’s actual out-of-pocket expenses (i.e. costs associated with entering this Giveaway). The participant waives all rights to have damages multiplied or increased.

14. The Giveaway hosted by the Sponsor is in no way sponsored, endorsed, administered by, or associated with FIFA, Meta Platforms Inc., or Twitter Inc.

15. You, the Entrant, have affirmatively reviewed, accepted, and agreed to all of the above terms and conditions by participating in this giveaway per the Official Rules.

Back to Matchday News